Gail Tremblay / Onondaga and Micmac I was born in Buffalo, NY in December, 1945, in the middle of a giant snow storm. I was in a rush to enter this world, and was born forty-five minutes after my mother broke water. After they cleaned me up, both my parents held me. Then my dad left the hospital to go home, and was swallowed by the storm. He walked to a farmhouse and the owners didn’t have a phone, and took one look at him and sent him to the barn to sleep with their animals. It was very cold. By the time the storm was over, his car was buried, and he had to dig it out and wait for the roads to be cloud. It was three days before he could return to the hospital, and let my mother know he was still alive. She was very relieved to see him.

I grew up in the late forties and fifties in a world without cell phones, computers, or the internet, with people who told stories and showed me how to make things and find and process materials from the natural world to make things. I lived in the same house with my grandparents from the time I was two until I was five, and it was not until I was five that we got television. Many of the programs I saw scared and upset me. I was terrified of Superman because people were always fighting and punching on another. I was much more comfortable in the woods with the animals and the plants. As I grew up, I always wanted to learn how things were made. Perhaps that is what lead me to making art and weaving and working with fibers. And then living in American culture with its images of Indians made me want to re-contextualize the things I saw and comment on what I was seeing, and I started to weave film and turn weaving into a conceptual art. I use non-traditional materials to explore ways I can weave traditional Onondaga and Micmac basketry forms so that my work will comment on indigenous life in the 21st Century. I began making film baskets when I taught with Marge Brown, a filmmaker at The Evergreen State College where I was working. I asked our students for out-takes from their films. I found film was an interesting material to weave, and I enjoyed the notion of recycling film and gaining control over a medium that had historically been used by both Hollywood and documentary filmmakers to stereotype American Indians. I relished the irony of making film take on the traditional fancy stitch patterns of our ash splint and sweet grass baskets. Soon I began to develop more complex patterns and to use leader as well as exposed film. I also began to use recycled footage from films being thrown away by libraries so I could choose certain images that suited my themes. I enjoy creating titles to contextualize these baskets and often choose materials to ironic purpose. The choice of weaving stitches, many of which have names, is deliberate. I make baskets with both 35 and 16 mm film. 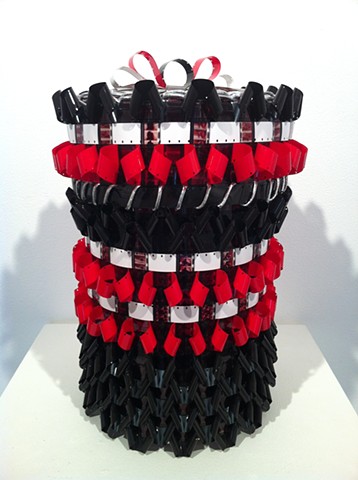 Gail Tremblay - In The Inuit Fashion
< previous next >