Lisa Telford / Haida I am a Git’ans Git’anee Haida weaver. I come from a long line of weavers including my grandmother, mother, aunt, cousins and my daughter. I learned traditional techniques of Haida basketry from Delores Churchill, and Haida cedar garments from Holly Churchill. Since 1992 it has been important for me to pass on tradition and maintain a high standard of perfection. I harvest and prepare my own material, using red & yellow cedar bark and spruce root in my work. Harvesting cedar bark takes me hundreds of miles from home and many hours of preparation time. The bark is traditionally stored for one year and then further processing is required before weaving may start. I stuck strictly to the tradition of form follows function until 2004 when I jumped off the cliff into contemporary cedar clothing, cedar shoes, cowboy boots and neckties.

“Haida Basketry was essential for survival years ago. I continue the tradition, celebrating the beauty of nature.”

Lisa’s award winning work is done in both contemporary and traditional methods of weaving including twined and plaited. Her work encompasses baskets, traditional hats, and cedar bark clothing. 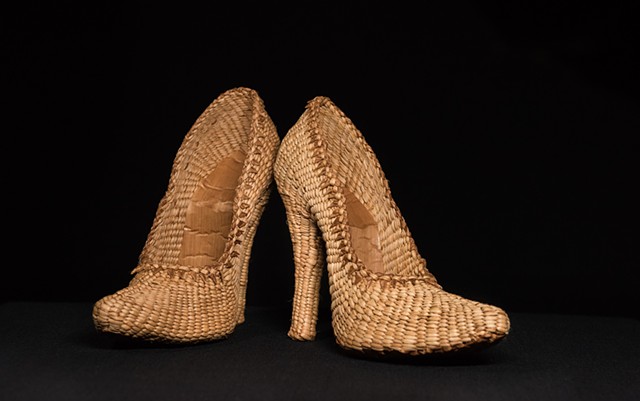 Lisa Telford - Too Haida
< previous next >