Past Exhibitions > Woven: The Art of Contemporary Native Basketry 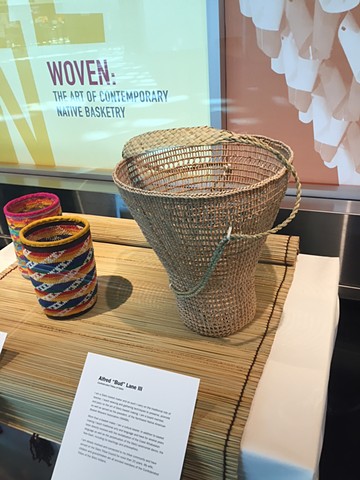 Alfred “Bud” Lane III Confederated Tribes of Siletz I am a Siletz basket maker and as such I carry on the traditional role of teacher. I teach weaving and gathering techniques to preserve, promote and pass on the art of Siletz basket making. I am a board member, as well as served as the president, of the Northwest Native American Basket Weavers Association (NNABA). More than a basket maker, I am a culture bearer. In addition to basket making I teach traditional arts and language and have for several years been directly involved with the revitalization of the Coast Athabaskan language as well as the perpetuation of the Siletz ceremonial dance, the Nee-Dash, including its teachings and philosophies. I am deeply involved and connected to my tribal community and have served on the Siletz Tribal Council for more than 20 years. My wife, children and grandchildren are all enrolled members of the Confederated Tribes of the Siletz Indians.

To contact the artists about purchasing or commissioning work you can email him at: BudL@ctsi.nsn.us